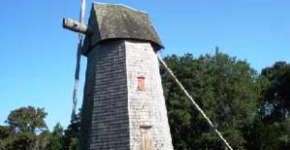 As you look at Godfrey’s Mill, just imagine Chatham on a windy day in 1797. You have just come from your farm and driven your wagon full of corn up the hill overlooking Mill Pond. This is where your neighbor, Colonel Benjamin Godfrey, has just built a gristmill which means you don’t have to carry your corn on a long ride to Plymouth to get it ground.

The mill is an impressive sight standing thirty feet tall. It has three stories, making it taller than most mills. The mill was built with oak and pine that was probably floated down from Maine, and its eight sides are covered with cedar shingles.

As the arms turn around in the wind, you see they are covered with sails made from flax that was probably grown and woven by one of your neighbors. You also hear the wooden gears turning and the grinding of the mill stones, which most likely were brought as ballast on a ship returning to Chatham from faraway ports.

Since you live in a town surrounded by water on three sides, it is interesting that the top of the mill looks like an upside down boat. The miller turns this top using the long trail pole, so that the sails will pick up the wind. If the wind keeps blowing strongly, you will get your bag of corn ground in about ten minutes and be home for dinner with freshly ground corn meal.

The earliest mills ground corn, wheat or rye. The corn was ground into corn meal and then used to make foods such as Corn Bread, Johnnycakes, Hasty Pudding and Indian Pudding. The wheat and rye was ground into flour that was then sifted to separate the germ and bran from the mixture. This resulted in white flour, which was more expensive than whole grain flour. Most ordinary folks used only whole grain flour and the wealthy folks used white flour.

Colonel Benjamin Godfrey built a wind powered grist mill beside his house, overlooking Mill Pond, in 1797 during the second term of President John Adams. By the time he built this mill, Benjamin Godfrey was one of Chatham’s distinguished citizens. He had led a company from Chatham to the Battle of Bunker Hill and rose to the rank of Colonel during the Revolutionary War. In 1782, when a British privateer entered Stage Harbor in Chatham with the intent of stealing local vessels, Colonel Godfrey led local residents in repelling the attack with cannon fire. He was also a civic-minded businessman who served as a selectman for six years. The mill that Colonel Godfrey built served the town of Chatham for many years until its active commercial use ended in 1898.

In 1956, the Crocker family gave the mill to the town and it was restored and moved to its present location in Chase Park. The original location of the mill is marked on the eTour Map with pin #19a. For more information about the design of the Godfrey Windmill, press the “Windmill Architecture” button below.

Today this is the only remaining windmill of possibly eleven mills built in Chatham. It is a rarity among Cape Cod mills to still be located in the town where it was built. The mill is listed on the National Register of Historic Places.

Not only has this windmill survived, but several expressions that are still used today started out related to the process of milling: