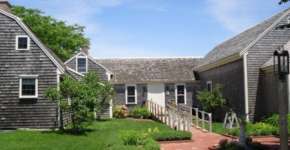 The Joseph Atwood house is one of the oldest surviving buildings in Chatham, dating from around 1752. It is also one of the finest examples around of Cape Cod architecture.

Joseph Atwood was born in Eastham in 1720, and moved to Chatham where he married Deborah Sears in 1742. He was a successful sea captain, and around 1752 he built the Atwood House. Many succeeding generations of Atwoods populated the area around the original Atwood House. What is now Stage Harbor Road was once named Atwood Street, and was the location of the Atwood School and Levi Atwood’s Store, both long-time historic Chatham sites.

Over the years, the house was a both home and a store; it remained in the Atwood family until 1926 when it was purchased to become the home of The Chatham Historical Society. A public campaign was conducted to raise the $5000 in funds needed for the purchase. At the time of the purchase, Chatham summer resident and well-known author Joseph C. Lincoln wrote an article celebrating the achievement of saving this historic building. Read or hear an excerpt of Joe Lincoln’s article by pressing the in-depth button below labeled “Joe Lincoln’s 1926 Article”. A picture of the Atwood House in 1935 is on the page with Joe Lincoln’s article. This picture is from the Historic American Buildings Survey collection of the U.S Library of Congress, and shows the Atwood House before museum expansion started.

The Chatham Historical Society’s collections grew, and expansion began in 1949 with the addition of the Joseph C. Lincoln Room. In subsequent years the Durand wing, the Nickerson wing, the Mural Barn, and the Portrait Gallery were added to provide galleries necessary to house the constantly expanding collection. A major expansion and renovation of the entire museum was completed in 2005, along with restoration and relocation of Chatham’s famous twin light lantern house, with its original Fresnel lens, and the creation of a gallows for the museum’s collection of school bells. Additional preservation and restoration to the original Atwood House section of the museum (now referred to as the “Old House”) was completed in 2011. This work earned the Atwood House Museum a 2011 Chatham Historic Preservation Award.

Today the Historical Society’s Atwood House Museum reflects life in Chatham over the centuries, with both permanent and special exhibits. Besides the galleries and items mentioned above, the museum grounds have a mid-20th century Nickerson North Beach Camp, and a Wampanoag mishoon. Touch the additional links below to take a separate eTour of the property, or to jump to the Museum’s website.