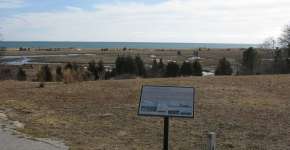 This site was once the location of radio transmission towers that sent ship-to-shore messages all over the world. It was part of RCA’s Marine Communications Station WCC, that was headquartered in North Chatham, where the Marconi Maritime Center is now located. A nearby plaque shows pictures of the marsh below covered with a web of poles and antenna wires.

Because the strength of radio transmission signals caused interference at a receiving station, the two operations had to be separated. When the Marconi Wireless (receiving) station first opened in North Chatham in 1914, its transmitting towers were located off-Cape at Marion, Ma. This transmitting station was opened in 1947 by RCA, which operated the North Chatham Station at that time. In addition to the web of ordinary poles and antenna wires, there was a 300 foot steel tower with four large concrete footings, which are visible in the marsh below.

An operations building was located part-way down the slope toward the marsh, and a residence building sat near the top, not far from the present plaque.

The Town of Chatham purchased this property, along with the North Chatham WCC property, in 1999 from the MCI Corporation. This 30 acre parcel was designated Town conservation land, and is called the Forest Beach Conservation Area.