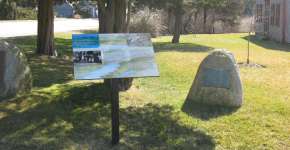 For thousands of years before the arrival of Europeans, Wampanoag people lived all over what is now Southeastern Massachusetts and parts of Rhode Island. The Wampanoag were a confederation of smaller groups which each occupied distinct territory; the Chatham area was called Monomoit, and was the domain of the Monomoyick people. Monomoit was one of 67 villages of the Wampanoag Nation. Old historical maps show that the territory occupied by the Monomoyick people was not strictly along Chatham’s modern boundaries, but included all of what is now Chatham, much of today’s East Harwich, and a section of Brewster from East Harwich to Cape Cod Bay.

At the time of the first European settlers, the leader, or sachem, of the Monomoyick people was Mattaquason. He lived near what is now the Christopher Ryder House, across the street from the current Nickerson Family Association property. The European settlers continued to call their village Monomoit, until it became the town of Chatham in 1712. The heartland of the Monomoyick settlement was around Muddy Creek, just north of Mattaquason’s dwelling place, spanning the current boundary between North Chatham and East Harwich. (The Isabel Bell Smith Monomoy River Conservation Lands off Bay Road on the Harwich side of Muddy Creek includes a 1.25-mile trail that offers a good overview of the creek.) The current Route 28 was once the walking path for the Nauset, Monomoyick and other native people to travel between what is now Orleans and Chatham. They forded Muddy Creek at the ’Wading Place’, site number 55 on this tour.

Typically the Wampanoag people lived on the coast in the spring and summer to take advantage of abundant fish supplies while they also cared for their fields of corn. Upon completion of the harvest, they moved inland where they hunted and fished along the rivers and ponds. The westward movement of the Atlantic beaches has eroded or flooded many of these coastal sites. The Wampanoag community maintained a balanced society based on their relationship with the natural world and one another. Large circular homes, made of wood, reeds and bark, were snug and warm in the winter and comfortable in the summer. Tools and utensils used in daily life were designed for specific tasks such as hunting, butchering, chopping wood, drilling shells, scraping hides, and building boats. Stone and shell implements were often sharpened against a harder stone, such as the one that has been found next to Goose Pond - site number 56 on this eTour.