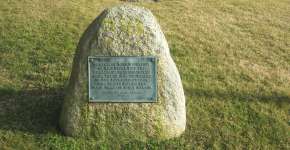 The burial place of Tisquantum (Squanto), a Wampanoag from the Plymouth area who died in Monomoit in 1622 while guiding Pilgrim William Bradford on a trip to purchase Indian corn, is in the vicinity of Pleasant Bay/Muddy Creek. The actual burial site is unknown.

Tisquantum (better known historically as Squanto) was a member of the Wampanoag Patuxet tribe. Many history books recount his story. Prior to the Pilgrims landing in Plymouth, he crossed paths with John Smith, of Pocahontas fame, and was later taken captive, along with other Patuxet and Nauset. He was brought to Spain to be sold, but he was rescued by Spanish Friars. He made his way to England and then to North America, and finally back to the Patuxet homeland, only to find that his entire tribe had been wiped out in the massive plague that decimated the Wampanoag only a year before the Pilgrims arrived. Ironically, the Pilgrims settled in the nearly empty land that had been the home of Tisquantum’s Patuxet tribe.

Tisquantum became an interpreter and advisor for the Pilgrims, helping them through their first winter and teaching them to grow native crops. He was also integral to negotiating a peace treaty between the Pilgrims and the Wampanoag, ending a hostile environment that had started with his own abduction in 1614.

On a trip with Governor William Bradford to trade for seed for the next growing season, Tisquantum fell ill while their ship was in present-day Stage Harbor, and he died within a few days. In Bradford's History of the English Settlement, Governor Bradford wrote: “Here Squanto fell ill of Indian fever, bleeding much at the nose, which the Indians take as a symptom of death, and within a few days he died. He begged the Governor to pray for him, that he might go to the Englishman's God in heaven, and bequeathed several of his things to his English friends, as remembrances. His death was a great loss.”

The memorial plaque and stone here at the Nickerson Family Association property was a gift from the Chatham Historical Society in 1955.