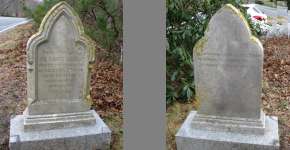 A major figure in the history of smallpox in Chatham was Dr. Samuel Lord, a doctor who faithfully treated the disease’s victims during Chatham’s smallpox epidemic.

Dr. Lord began medical practice in Chatham in 1735. He was Chatham’s first resident physician. The sixth of eight children of the Rev. Joseph Lord and his wife Abigail, a daughter of Massachusetts Governor Thomas Hinchley, he was born in Charleston, S.C. on June 26, 1707. His father, a graduate of Harvard College in 1691, was the first pastor of the First Congregational Church of Chatham, from its incorporation in 1720 until his death. The pastor also practiced medicine and imparted this knowledge to his sons, Joseph and Samuel. Samuel came to Chatham with his father’s family. Dr. Lord, who did not marry, lived on a farm near the Training Field triangle. He treated patients during the smallpox epidemic that ravaged Chatham from November 1765 to May 1766; he contracted the disease in the midst of the epidemic, and died in January 1766. He was buried on his farm here on what is now Training Field Road. His original simple, undignified grave marker was replaced by a new headstone, commissioned in the 1950’s.