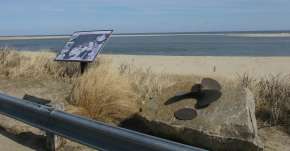 The most famous rescue from Station Chatham, as well as in the entire Coast Guard, occurred on February 18, 1952. In the early morning hours, two tankers each split in half in the 60 foot seas of a fierce winter Nor’easter. The tanker Pendleton broke in half around 6 am, about 10 miles off the coast of Chatham. The ships did not run aground, but broke apart from the stress of the heavy seas. The bow section of The Pendleton sank, taking with it the Captain and seven other crewmen. Thirty-three men were trapped on the drifting stern section, unable to send an SOS. It was not until late afternoon that the stern was sighted and a rescue craft was sent out from the Coast Guard’s Chatham Lifeboat Station (now the Chatham Coast Guard Station).

The 36-foot Coast Guard motorized lifeboat CG36500 with a crew of four left the Chatham Fish Pier at around 6 pm, traversed the treacherous Chatham Bar, lost its compass to a crashing wave, found the Pendleton, and rescued thirty-two crew members off the listing and heaving wreck - in the dark with only a searchlight for illumination in the driving hurricane-force wind and rain. The crew on the 36500 that night was BM1 Bernard Webber, EN2 Andrew Fitzgerald, SN Richard Livesey, and SN Erwin Maske. They crammed thirty-two additional people into their 36-foot boat before heading back toward land, hoping only to run aground on a beach. Incredibly, they found their way back into Chatham Harbor and to the Fish Pier, where they were surprised to find a large crowd of Chatham’s citizens waiting to assist the rescued crewman. The entire CG36500 crew received the Gold Lifesaving Medal for their heroism. BM1 Bernie Webber called it “a day in which few would remain untouched in one way or another by the events that took place.”

The eTour map pin 8a marks the approximate location where the rescue occurred.

A new Sentinel Class patrol boat, the 154-foot Coast Guard Cutter Webber, has recently been commissioned in Miami, named in honor of Bernie Webber. All boats of this class are named after Coast Guard heroes, according to the USCG.

Webber’s boat, the CG36500, was built in 1946 and was retired from service in 1968. The vessel was eventually acquired by the Orleans Historical Society, and in 1982 was fully restored by volunteers. It is maintained through private donations. The lifeboat remains afloat, actively touring ports throughout southeastern New England as a floating museum dedicated to the brave lifesavers of Cape Cod.

To this day the rescue of the 32 crewman onboard the Tanker Pendleton is known as “The Coast Guard’s Greatest Peacetime Rescue”. It has been commemorated several times with tributes and books. The most recent celebration was held in Chatham on March 18, 2012, honoring the 60th anniversary of the Pendleton rescue, as part of Chatham’s 300th anniversary program. The most recent of several books and articles is The Finest Hours: The True Story of the U.S. Coast Guard’s Most Daring Sea Rescue, by Michael J. Tougias and Casey Sherman.