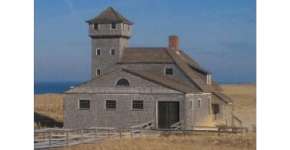 Four Life Saving Stations were located in Chatham - their former approximate locations are shown on the eTour map with pins labeled 7a, 7b, 7c, and 7d.

In addition to huts used for shelter by stranded mariners, early efforts at assisting ships in distress were lifeboat stations along the shore, manned by volunteers. In 1870, disastrous winter storms caused a horrendous number of deaths from maritime disasters along the Atlantic coast. This started a period of building better lifeboat stations with paid crews. In 1878 the growing network of lifesaving stations was organized as a separate agency of the Treasury Department and named the U.S. Life-Saving Service. Its motto was “You have to go out, but you don’t have to come back”.

The original Life-Saving Service was separate from the U.S. Lighthouse Service, which operated three lighthouses in Chatham. The Life-Saving Service was merged with the US Cutter Revenue Service in 1915 to form the US Coast Guard, and the Lighthouse Service was later merged into the Coast Guard, in 1939. The formation of the Coast Guard Service in 1915 did not change the mission of the Life-Saving Stations, only the name of organization which operated them. It was other factors that caused the closure and consolidation of Chatham’s Life-Saving Stations. The opening of the Cape Cod Canal in 1914 caused a reduction of shipping traffic south of Monomoy. Motorized lifeboats and other technological advancements allowed fewer stations to cover a larger territory. All the other Chatham stations were consolidated at the Chatham Station on Morris Island by 1944, when the wildlife refuge was created on Monomoy. A transition period followed, and by 1955 all search and rescue operations had been consolidated into the Coast Guard operations at the Chatham Light. Today the mission of helping those “in peril upon the seas” remains, now performed by Coast Guard Station Chatham.