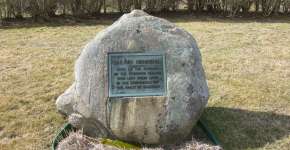 The Unknown Sailors Cemetery was the burial ground of those whose dead bodies washed ashore at Chatham. Shipwrecks off Chatham’s shores were a way of life for close to two hundred years - from the early Colonial days when British and French ships roamed the seas, until ship traffic abated after the opening of the Cape Cod Canal. It is said that between Nauset and Nantucket have occurred one-half of the total known wrecks on this whole Atlantic and Gulf of Mexico coasts. In twenty years, 1887-1907, enough vessels were lost between Provincetown and Monomoy Point to form a solid line along the entire coast between these points.

Frequently no one knew there had been a shipwreck until cargo, bodies, or parts of a ship started washing ashore. The concept of providing assistance to shipwrecked mariners was pioneered by the Massachusetts Humane Society. The earliest form of assistance consisted of huts of shelter for stranded sailors; there were several on Chatham’s eastern shores by 1802. Life-saving services followed, volunteer efforts at first, then organized and professional. But ships in distress had to be sighted before they could be assisted, so the life-saving efforts did not make obsolete the huts of refuge for sailors washed ashore alive and needing protection from the harsh elements. After the U.S. Life-saving Services was started, these stations became shelters for stranded seamen, and they maintained additional unmanned shelters, called half-way houses, which were located half way between the life-savings stations.

Sailors who washed ashore dead, or died from exposure after making it to shore, needed to be buried. Often the ship they had been on was not even known, unless identifiable parts of it also washed up. So the unknown sailors were buried by the town in this small cemetery. There were no gravestones, since they were unknown, and the town was paying besides. It’s not known why there is a single headstone in the cemetery. Old town records at the Chatham Historical Society show periodic expenses being paid for these burials.