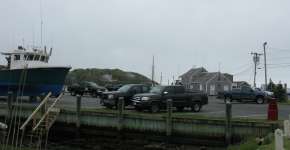 Stage harbor Road was formerly named Atwood Street, after the Atwood family that populated so much of this street at one time.

In addition to the individual tour sites along this segment of the Loop tour, the former home of Alice Stahlknecht is across the street from the Champlain Monument. This is where her Mural Barn was located, which was later moved to The Atwood House Museum.

You can look out across Stage Harbor to see the Stage Harbor Lighthouse, one of three lighthouses in Chatham at one time.

As you return up Stage Harbor Road, you will pass the Benjamin Godfrey House on the right at 465 Stage Harbor Road. This property is significant because it was the home of Colonel Benjamin Godfrey, one of Chatham's prominent citizens during the Revolutionary War. Godfrey was also the operator of the town grist mill, located just north of the house, on Mill Hill, where it stood until 1956 when it was moved to Chase Park (pin #19 on eTourChatham). Colonel Godfrey is also the subject of an in-depth profile at the Atwood House Museum – one of four Chatham natives whose stories cover more than three hundred years of Chatham history, in an exhibit titled Visions of Chatham Past: an Exhibit of Personal Stories. The museum is on Stage Harbor Rd, just a short distance past the Godfrey House. The Benjamin Godfrey House was the recipient of a 2012 Chatham Historic Preservation Award for the recent renovation of the home.