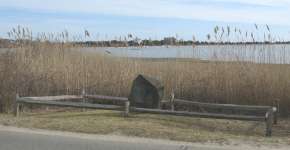 Samuel de Champlain was a French explorer, navigator, map maker, journalist, artist and soldier. In 1605 and again in 1606 he sailed from Nova Scotia to Cape Cod exploring and mapping much of the coast along the way, while searching for a site for a permanent French settlement. In his 1605 expedition, he named the sand dunes of Nauset Beach the “White Cape”, and the area around the current Nauset Harbor “Malle Bar”, or “bad bar”, perhaps the first recorded reference to the treacherous waters on the Atlantic side of Cape Cod.

In October of 1606 Champlain returned, this time exploring the area of Monomoit, now Chatham. He was forced by a broken rudder to land near what is now Stage Harbor, guided to a safe anchorage by the Wampanoag. Although his stay was brief, Champlain left an invaluable description of the area. His journals, published in Paris a few years later, described the land as hilly and wooded with oak, cedar, and a few pines. He judged the harbor as not being deep enough to start a settlement.

His map of the area was so accurate that we can still recognize Mill Pond, Oyster Pond and Great Hill today. This map is displayed on the Chatham 300 plaque entitled “Champlain’s Visit”. He named this area “Port Fortune”. Also note the shoreline profile of the barrier beach on this map, around what is now South Beach and Morris Island. This is not as recognizable, as it is part of an ever-changing coastal landscape.

Champlain stayed at Port Fortune for about ten days. Although interaction between the French and the Wampanoag was positive in the beginning, relations with the native Wampanoag deteriorated and a skirmish left four French and many more Monomoyicks dead.

To read or hear an excerpt from Champlain’s journal that describes the encounter from the Europeans’ perspective, press the ’in-depth’ button below marked “Champlain’s Journal”.

The Samuel de Champlain 1606 Voyage Commemoration Monument on Stage Harbor Road was the creation of Carol Wight, a professor at The University of Johns Hopkins, and the husband of Alice Stallknecht (Wight), whose murals hang in the Mural Barn at the Atwood House Museum. Their home, and the mural barn as well, were located across the street from the present Champlain Monument location. Wight bought the plot of land and paid for the first plaque. This was probably in the 1930’s. The original monument or plaque was stolen, and one or more replacements have been installed.

Champlain’s landing at Monomoit was the first and last recorded visit by Europeans to what is now Chatham, before William Nickerson arrived in 1656.