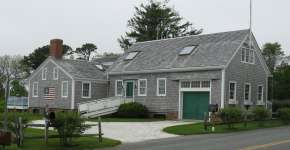 According to property histories prepared for the Chatham Historical Commission, the original building on this site was constructed around 1858 for William Hamilton, a merchant farmer and one of the founders of the local Methodist Church. In the latter part of the 19th century, the building became a laundry known as the Crystal Springs Laundry, and after that, it was bought by Charles Andrew Howes, who converted it into a sail loft.

Charles Andrew Howes, who lived at 66 Cross Street, was the son of Collins Howes, who was in the fishing or fish-salting business, and later became an early lightkeeper of the Chatham Light. Charles was sent off to Boston to learn the sailmaking business, and then returned to Chatham when he married, and set up his sailmaking business, which he operated until 1934. Howes was acknowledged as one of the masters of the sail making trade. Sails were stored, repaired, and manufactured at the Loft.

A sail maker’s enterprise was and is still today called a sail loft, and often was a true loft. Much floor space is needed to lay out sail material, whether for inspection and repair, or large pieces being sewn together to create a sail. Sails were made by hand, using a large sail needle and waxed twine.

For a few years, the building was owned by Spaulding Dunbar, who built boats here until about 1939. In 1940, the property became the Old Harbor Candle Factory, which supplied candles nationwide during World War II. In 1947, it was converted to a clothing store - named The Sail Loft, which operated here from 1947 until 1996 — 49 years. It was then converted to a private residence.

Charles A. Howes was on Chatham’s 200th anniversary celebration committee in 1912. When his old residence on Cross St. was sold in 1986 by the family to whom Howes had left it, many of Howes’ original sailmaking tools were still in the house, and were donated by the new owner to the Chatham Historical Society’s Atwood House Museum, where they are now on display.

Also on display at the Museum is artist Frederick Wight’s portrait of Charles A. Howes, titled “The Sailmaker”, which pictures him at his workstation with his sail and tools. Frederick Wight, who moved to Chatham while still a boy, was the son of painter Alice Stallknecht. Early in his career, he did a series of paintings of Chatham sea captains and mariners. While Wight was painting his subjects, his mother interviewed them about their careers, and later published those transcripts. Wight later taught art history at UCLA, and became director of the UCLA art museum, which is now named in his honor.