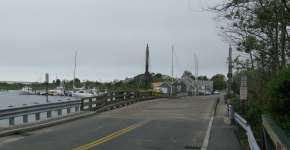 The Mitchell River Bridge takes its name, of course, from the Mitchell River, which in turn got its name from an adjacent farm owned by William Mitchell, who married a daughter of the original William Nickerson. It is also known locally as “Dougie’s Bridge”, for former town selectman Douglas Ann Bohman; when she retired from the Board of Selectmen in 2008, her gift was the plaque you can see on the bridge coming from the east.

Chatham’s Godfrey Windmill originally stood a few hundred yards to the north-west, on top of what was called Mill Hill, marked by eTour map pin #19a.

There was not a bridge over this river until the 1850’s. Before the first bridge was built, ferries or private boats were used to cross the river. Horses and a stage coach were kept nearby, and were brought across the river by ferry to pick up passengers who had arrived by packet (boat) at Stage Harbor wharf.

Bridge Street was laid out as a road in 1854, and the first bridge was a wooden structure built in 1858 at a cost of $1,300. It must have been a drawbridge from the start, because Mill Pond was home to fishermen and boat building throughout the 1800’s, but old postcards show a very simple and narrow wooden trestle bridge across the river.

The bridge has been repaired regularly over the years, and periodically closed for repairs. The first controversy of record was in 1903, when a man was badly injured by the drawbridge. A committee was appointed to see if they could do away with the draw, because it was in dangerous condition, but they apparently concluded that no one had the authority to close the draw. The town voted to build a new bridge, but nothing was done until 1907, when $5000 was spent to make major repairs and improvements, making it more suitable for cars to drive across.

The bridge was closed again for repairs for most of the time from 1915 to 1920, and in 1925-1926 the wooden trestle was re-built at a cost of $9,000. In 1941, an electric hoist and warning signals were installed. Photos at The Chatham Historical Society show major construction going on in 1949. Talk began again in 1976 of rebuilding the bridge, but construction did not begin until 1980, with the bridge re-opening in 1986.

The Mitchell River Bridge is again in need to major repairs, to the point of replacement, and there have been discussions in town about whether a replacement bridge should maintain the all-wooden construction of the current bridge. The Federal Advisory Council on Historic Preservation has recently set a compromise direction of a concrete and steel substructure, with wood predominating the upper surface areas.