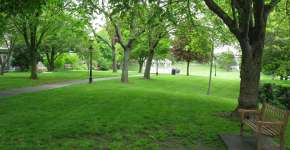 Kate Gould Park is a peaceful small town park that becomes the center of town every Friday night in the summer, as the Chatham Band brings to life one of Chatham’s best-known family entertainment activities – “It’s Band Time in Chatham”.

The band that is now the Chatham Band was formed in 1931 as the American Legion Band, and marched in parades, played at ceremonies including the opening of the two bridges over the Cape Cod Canal, and gave concerts at the old bandstand located where the town parking lot is now situated next to the Town Hall. After a few years, the name was changed to the Chatham Band. During World War II the band was shut down, but re-formed soon after. The town bandstand was moved to Kate Gould Park after the war, and in the late 1940’s the Chatham Band started the tradition of Friday night concerts, under the leadership of its new Band Director, Whit Tileston. A new larger bandstand later replaced the old one that had been moved, built by members of the band. It was named the Whit Tileston Bandstand in 1995 after the death of Whit Tileston, who had led the Chatham Band for 48 years.

The first concert of the 2012 summer will be the band’s ???? concert, as Band Director Kenneth Eldredge will surely announce.
The 2012 Season begins on June 29th and runs every Friday Night through August 31st, starting at 8 PM sharp with the opening Hi-De-Ho’s and Band Time in Chatham, and running 90 minutes until closing with The Star-Spangled Banner. Every week there is a mix of old and new tunes, show tunes and marches, with music for both kids and adults. The only other constant is the Bunny Hop, which has become a signature activity at Chatham Band concerts.
While played semi-regularly as part of dance sets for many years, it has now been played at every concert for many years. since ????.

You can read more of the history of The Chatham Band, and listen to a few selections of music, at the Band’s website, using the link below.