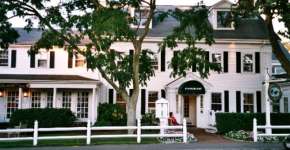 The Wayside Inn was originally built as a house by Joseph Nickerson in 1860. He called it the Nickerson House, and may have taken in guests. Timothy and Harriet Loveland purchased the property in 1865 and ran it as an inn called The Ocean House. In 1867 it was purchased by Isaiah Harding and he changed the name to the Nauset House. After a series of owners, the inn was auctioned off in 1901, and was bought by one of its former owners, Washington Taylor.

The Taylors used it for as a private home for a short period, and then re-opened it as the Ocean House until 1917, when they sold the inn to their son and daughter-in-law, Frank and Margaret Taylor, who changed the name to the Wayside Inn. It transferred ownership several times until Marjorie Haven, proprietor of the Hollyhock Tea Room and Inn at 549 Main Street, bought the Wayside Inn in 1937. It was a popular spot with the service men and women of World War II, who were well taken care of by “Ma Haven,” as she was fondly called.

In 1971 Mike Hickey purchased the Inn, kept it open year round, and brought it up to modern standards. It has undergone total renovation by its current owners. This beautifully renovated inn and restaurant still remain a popular destination for tourists and residents alike.