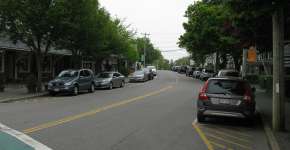 As you continue along Main Street toward the bend that takes you to the Lighthouse, continue to notice other historic buildings. The building that is now Forest Beach Jewelers was built at a different location around 1800 by James Hamilton, who kept a store that was attached to the house. The Methodist Church purchased the house as the parsonage for Israel Washburn, Chatham’s first permanent Methodist minister in 1835. The house was sold to Captain Thomas Dodge in 1839. It is believed that the house was moved to its current location around that time. Coincidently, Dodge became the Methodist minister from 1839–1841. The house stayed in the Dodge–King family for over a hundred years until it was sold in 1963. In 1973, it became the Dodge House Art Gallery, and several owners and businesses later, it is currently a goldsmith-jewelry store.

A bit farther along is the Eldredge Garage, which began in 1904 when Joseph C. Eldredge opened a livery business in a large barn that housed horses and buggies. Eldredge’s business included transporting people to and from the train depot. In 1915 as automobiles made their way into town, the livery became Eldredge Service Station. Over the years it has also been the location of Red Men meetings, square dance lessons and a general gathering place for the Chatham locals. Eldredges have owned and operated the garage for over a century.

Continue along the right side of Main Street when the sidewalk ends on the left side, to the intersection with Shore Road, where Main Street takes a bend toward the Lighthouse. From the point where you pass the Eldredge Garage, you will be in the part of town called the “Old Village”, which you will hear more about in the next segment of the Loop tour.