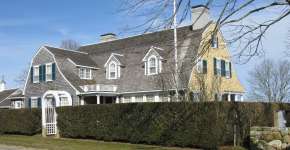 Cross Trees was the summer home of author Joseph C. Lincoln from its construction in 1916 until his death in 1944. Lincoln was a popular author of novels set in fictional Cape Cod villages.

Learn more about Joseph C. Lincoln as a writer by pressing the button at the bottom of this page.

Lincoln built Cross Trees when he was 46 and already a successful author. Postcards of Cross Trees were a popular tourist item on the Cape, perhaps because Cross Trees represented Cape Cod as Lincoln portrayed it - quaint, colorful (in his magnificent gardens), and by the sea.

“Cross Trees, the house Joseph Crosby Lincoln built in Chatham ... is an example of what is commonly called the Shingle Style. The extensive shingle covering on the house, the various classical details, and the gambrel roofs were all derived from 17th and 18th century New England houses. However, Cross Trees was modern also in the sense that the interior arrangements were for a seaside resort house and its location near the ocean with a view out and porches and terraces, was very much part of the resort phenomena. The term that might have been used in the 1910s to describe Cross Trees was “modernized colonial,” meaning older Colonial forms brought up to date....

For Joseph Crosby Lincoln the house was an important element in his many stories and books that depicted Cape Cod. One only needs to look at the illustrations in many of his books, or read the descriptions such as in Cy Whittaker’s Place (1908) to see the importance. In that book he writes: “it was a big, old fashioned dwelling, gambrel-roofed and brown and dilapidated.” There are many other similar passages in books by Lincoln. That he was passionately interested in architect is testified to by his involvement in the 1926 saving of the Atwood house in Chatham, now the Chatham Historical Society....

Lincoln popularized Cape Cod and its architecture and in so doing helped to create one of America’s most popular architectural idioms the Cape Cod House. What we call the Cape Cod today is an outgrowth of the earlier modernized colonial, but now made available to the middle class.”

The Cross Trees property was the recipient of a Chatham Historic Preservation Award in 2005. The award citation said, in part,

“This fine Shingle Style residence, the subject of many historic Chatham postcard views, was built about 1916 as a summer home for noted Cape Cod author Joseph Lincoln... After purchasing Crosstrees in 1989, the current owners began working to restore the exterior of the home to its original or historically significant appearance. For example, the front porch was returned to its original unenclosed state and a rounded bay that was added to the facade was removed. This exterior work was completed by mid-2004 and the front elevation is now true to its original shingle design, complete with a rebuilt arbor and window boxes.”