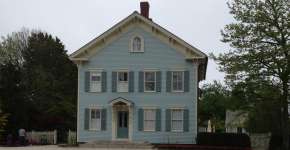 Sea Captain John Taylor build this house on the occasion of his marriage to Elizabeth Mayo of Brewster in 1860. Taylor was one of Chatham’s leading sea captains, and became master of the “Red Cloud” in 1878. Captain John Taylor was one of four brothers who were all sea captains on the international trade routes, whose father and grandfather had been sea captains as well. Three of the four brothers are profiled in the book Chatham Sea Captains in the Age of Sail by former town historian Joseph A Nickerson and his wife Geraldine. Two of John’s brothers, Prince and Horace Taylor, were part of the famous story of Neesima Shimeta, a young samurai-class Japanese man who had fled to Shanghai because he wanted to embrace Christianity, and who was brought to Boston by Captain Horace Taylor aboard the Wild Rover, and taken under the wing of that ship’s owner, Chatham native Alpheus Hardy. Much more of this story is told at the Atwood House Museum’s China Trade Exhibit, as well as in the recently published Chatham 300 book, Three Centuries in a Cape Cod Village; The Story of Chatham.

Back to Captain John Taylor, he commanded a variety of ships from the 1850’s into the 1880’s. It is said his wife accompanied him on more than forty sea voyages, and two of their sons were born at sea. When Captain Taylor died in 1886, his fame resulted in one of the largest funerals in the town’s history.

After his wife Elizabeth’s death, the home remained in the heir’s family for many years, until it was sold and opened as a guest house under the name “Red Cloud Manor” in the late 1940’s. In 1976, the property went back to being a private residence, as it is today.