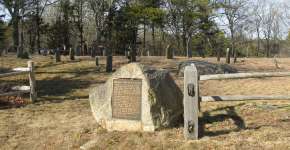 This area was the first village center of Monomoit (later Chatham). It was the area where people gathered to worship, hold meetings and discuss community affairs, and bury their dead. The first meeting house was built here in 1701, and the second in 1729. Both meeting houses served both religious and civic purposes. It was not until later that the church and state began to separate. The first meeting house was 22-by-13 feet, had a pointed roof, no glass windows, and two sets of benches that faced a pulpit.

The houses, cemeteries and meeting houses of the earliest settlers were in this area of Chatham until about 1800, when they shifted to the Old Village area, near the lighthouse.