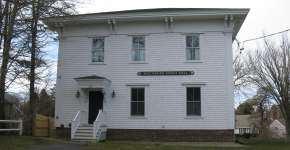 The building at 220 Stage Harbor Rd has served as the town’s Scout Hall since the 1920’s, but began its life in 1839 as the Atwood School, on Atwood Street. Unlike many buildings in Chatham, including at least one former schoolhouse, this building has not moved; instead, the street name was changed - Stage Harbor Road, at least from this point south, was originally called Atwood Street, and most of its inhabitants were Atwoods, starting with Joseph Atwood in 1752, who built his home that later became the Atwood House Museum, just down the street.

A new Tercentennial plaque is located on the property, remembering the building as The Atwood School. It is typical of the many small schoolhouses that existed all around Chatham in the 1800’s, several of which also survive, refurbished and re-purposed.

In 1642, Massachusetts required towns with more than fifty families to establish a school, although this did not mean there had to be a dedicated schoolhouse. Early schooling was done in homes around the town. The first real schoolhouse was built about 1790, at Old Harbor Rd and Barcliff Ave. Small school “districts” emerged, each one having a single small schoolhouse or a place of instruction in a home. These were not school districts as we know them today, but neighborhoods getting together to provide a school. The original Atwood School was built by the neighbors, who took out shares in it. By 1800, there were five such districts, and by 1840, when the Atwood School was brand new, there were thirteen. Schools were ungraded grammar schools; both sexes were taught, but often separately; and a school term could be as short as three months out of the year.

In 1858, the system began to change, with the introduction of a graded system, and a central grammar school was built where the Chatham ball field now stands. At some point, the town became the owner of these schools, and the separate districts and small schools were gradually consolidated. Only three remained in 1925, when those were closed and the new Chatham School for all grades was built on Main Street (it is now the Chatham Community Center). The Atwood School was one of those last three to close.

Subsequent history as scout hall, and Doc Keene Scout Hall, including renovation in 199?