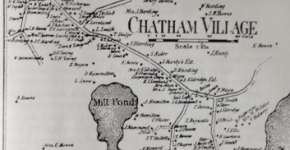 The Old Village is the area of Chatham around and to the immediate north of the Chatham Light. In the 1700’s this area began to grow as a village (small ’v’) distinct from the earliest center of the town, which was located around the original Meeting House (eTour location #50). As farming became more difficult due to poor soil, more of Chatham’s population turned toward the sea for livelihood - fishing or crew of merchant vessels, and all the associated trades that follow – salt making, fish drying, boat building, and salvaging. This area, originally called Tom’s neck and James Head (the now mostly eroded area of the original Lighthouse and bluffs to the east), grew into the new hub of commercial activities, and the residential community grew as well, including shops and a school.

Most of the houses in the Old Village were built in the 1700’s and 1800’s, with the majority being from the early to mid 1800’s. The “Old Village Association” has created an entirely separate walking tour through the Old Village, which was first published in 1997, but has been updated for Chatham’s 2012 Tercentennial, and is available in booklet format at various local outlets.

, and as a separate eTour on this web site. Look under “All Tours” on the eTourChatham home page.
Because of the narrow and dead-end streets in the Old Village, this Tour should be used as a walking (or biking) tour.

In 1871 a major breech of the outer barrier beach occurred, followed by years of great winter storms, which wrecked havoc with the commercial activities at the eastern ends of many of these Old Village streets, and caused great erosion, including the erosion of the Lighthouse bluff. People and houses moved west around Main Street, and some businesses moved there, making Main Street the new center of town, where it remains today. The fishing shanties that lined Mill Pond remained longer, and very gradually the Old Village turned into an almost entirely residential neighborhood. Even into the 1940’s, however, this section of Main Street through the Old Village was lined with small retail businesses – inns, restaurants and the like. A large number of the homes in the Old Village have preserved their historic character as they were repaired and updated, so much so that the neighborhood applied for, and in 2002 received the distinction of being included on the National Register of Historic Places.