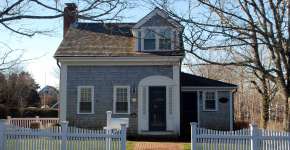 In 1865, Andrew Harding and his brother combined their stores which were at risk near the beach, and opened a new general store here on Main Street. Andrew Harding's Store was the best-known store in Chatham for many years – think of The Mayflower, Ben Franklin, and a convenience store all rolled into one small cramped shop that everyone frequented. The benches in front of the store were a hang-out for old timers, who sat around and spun yarns about the good old days. Author Joseph C. Lincoln spent plenty of time here, and it is said these yarns and the men who spun them provided him with a constant source of ideas, and perhaps characters as well, for his stories.

Andrew Harding died in 1919, but the store remained in operation into the 1930's (the period when Joe Lincoln would have been around). It became a tearoom for a while, and then was converted to a private residence.