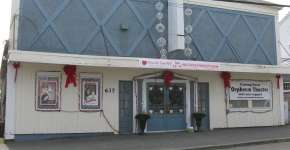 The building at 637 Main St was a CVS Pharmacy for 22 years until 2011, but it started out as The Orpheum movie house in 1916, and will soon return to its origins as the Orpheum Theater. The newly formed Orpheum Theater Project will turn the former CVS into a dual-screen cinema, with the goal of finishing by the end of 2012 and opening the new theater for the town to honor Chatham’s Tercentennial.

As with many of the buildings on Main St, this one has a storied past. In 1915, Captain A.H. Bearse bought a house on this property from Lowella F. Smith with the intention of erecting a first class opera and moving picture house. In June 1916, the new theater, named The Orpheum, opened with electric lights, fans, ventilation, and a seating capacity of 400. The following year, a new Link electric piano was installed which could play any category of music. In 1918, the Board of Health closed the theater temporarily due to an epidemic of grippe.

In 1919, the theater was showing the most popular movies of the time, including “The Quiet” with John Barrymore, “The Great Love” with Lillian Gish, and “Cleopatra” starring Theda Bara. When the town hall burned down in 1919, the Orpheum was used for Town Meetings, high school graduations, and live theater performances.

During the period 1921-1923, the theater saw many owners. It was owned by the Chatham Amusement Company, then was sold at auction for $20,250 to J.A. Collins of New Bedford and Louis Arenovski of Hyannis, then sold again to the Olympic Exhibition Company and sold again to Frank Kelley, Theodore Bearse, and Isaac Loveland. When talkies arrived in 1929, alterations and repairs were required. The first talking picture to be shown at The Orpheum was “The Gold Diggers of Broadway”, which drew great attention.

In 1938 the theater was acquired by Interstate Theater, which managed it until 1985. In that year, the building was sold to Chatham Development Trust, with a deed restriction preventing the showing of films. The period 1985-1990 saw many attempts to make live theater successful, including musical theater productions by several New England theater companies, as well as concerts by such notable entertainers as Ray Charles. Facing critical financial obligations, the owners had little choice but to rent the building as retail space. In 1990 it was leased to CVS Pharmacy. Many townspeople, summer residents, and visitors alike mourned the loss of a cultural asset, a tradition, a piece of history.

In 2011, CVS opened a new and larger store in the remodeled former Chatham Market building, just up the street, and this building become available for a new use. A group of townspeople quickly came together with a vision and found that the deed restriction had expired. The Harwich Multiplex Theater had also just closed, leaving no movie theater between Dennis and Wellfleet. The non-profit organization’s mission is to return cinema to our community by providing a venue for a wide range of films, including contemporary films and documentaries, indie and foreign films, as well as children’s and educational programming.

As of March 2012, a favorable agreement to purchase the property has been signed, over 1 million dollars has been raised from over 800 donors, and the town regulatory boards have been favorable. Chatham is responding with unparalleled enthusiasm!