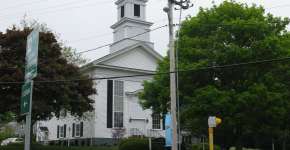 The roots of Chatham’s First Congregational Church date back to the first white settler of Chatham, William Nickerson, when meetings were first held at his home in 1665. The first meeting house was built around 1700 and a second, larger meeting house around 1730 - this one lasted a century; both were located in the old center of town at the intersection of Queen Anne and George Ryder Roads (eTour location #50). The church was supported by town taxes and the building was also used for town meetings as well as worship.

It wasn’t until 1824 that the Congregational Society severed its ties to the town, and church members were required to raise the money to support their own church. They built a new church in 1830, next to the Congregational Cemetery; both sites are now part the present-day Union Cemetery, which is to the west on Route 28, across from the Chatham Community Garden. Pews were sold at public auction to pay the nearly $3,000 it cost to build the new church. Around 1835, a new bell was bought for the steeple, and the present steeple bell is the same one, re-cast at the time the church was moved. In the late 1850’s the first organ was introduced.

In 1866 the congregation voted to move the church to its present location to be closer to the center of town. The vote was yes: 16, no: 11, and ’on the fence: 1’. In 1887, the steeple was damaged by lightning, and was restored using the top of the spire of the mast of a ship that had been wrecked off Monomoy.

A highlight in the church history was the installation of two of artist Alice Stallknecht’s murals. Alice Stallknecht was a painter who lived here for a while in the early part of the twentieth century, then continued to summer in Chatham with her family. According to researchers who participated in a 2003 conference on her art at the Atwood House Museum, Stallknecht

evidently had the idea for a monumental mural of Christ Preaching to the Multitude. She must have received encouragement from some person or persons at the Church. More specific details have not yet been found. However in early August 1932, the mural was complete and it was installed in the vestibule or vestry of the church. It was mutually agreed that the work was on loan and (at the request of either the artist or the church) it could be removed at any time. ..

The mural of Christ Preaching to the Multitude was followed in 1935 by a mural titled The Circle Supper. It consisted of a series of portraits of Chatham people that was organized around the theme of a church supper. The Circle Supper gave the artist an opportunity to use the portraits of local men and women that she seemed to do on a regular basis. The mural was installed in the Chatham Congregational Church where it remained until 1943.

The murals apparently caused considerable controversy for the fact so many of the figures were so recognizable. Today this recognition is part of the murals’ heritage as a part of Chatham’s history. The murals were moved to a barn at Stallknecht’s property on Stage Harbor Road, a barn which had originally been an engine barn at the Chatham Railroad Station. This barn and a larger set of murals, including the two described above, were later moved to the Chatham Historical Society, and are now the Mural Barn gallery of the Atwood House Museum.