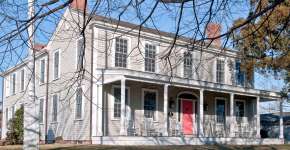 When Isaac Hardy built his home here in 1805, his 19-acre property stretched to the Chatham Harbor coastline.

Hardy had five sons, one of whom was Alpheus Hardy, who went on to become one of Chatham’s famous sons. Alpheus had a mercantile business in Chatham, owned a large shipping business in Boston, and later served as President of Western Railroad. In 1861, he was elected a Massachusetts State Senator.

It was Alpheus Hardy who owned the ship Wild Rover, on which Neesima Shimeta, a young samurai-class Japanese man was brought to Boston by Captain Horace Taylor. Horace Taylor was one of five Chatham brothers who all became sea captains; his brother John’s house is on eTourChatham, on Cross Street, eTour site number 47. Much more of this story is told at the Atwood House Museum’s China Trade Exhibit, as well as in the recently published Chatham 300 book, Three Centuries in a Cape Cod Village; The Story of Chatham.

By 1882 the property was in the hands of Isaac’s granddaughter, Almira and her husband Capt. Benajah Crowell, then skipper of the same Hardy–owned ship, the Wild Rover. Alimra Hardy Crowell is the subject of an in-depth profile at the Atwood House Museum – one of four Chatham natives whose stories cover more than three hundred years of Chatham history, in an exhibit titled Visions of Chatham Past: an Exhibit of Personal Stories. In a time where women were expected to stay in the domestic sphere, Almira insisted on traveling the world with her sea captain husband and children.

Several owners later it was converted into the Dolphin Motel in 1953. Frank and Marcia Kennedy purchased the Dolphin and operated it from 1986 until 2006. The rear structures on the property were torn down in 2006, and the original house has been completely renovated into a private home.