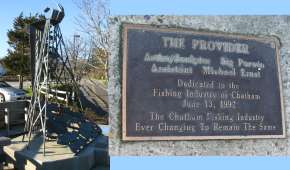 The sculpture titled "The Provider" features a strong hand pulling a fishing net from the sea with multi-fish and shellfish indigenous to Chatham caught in the net.

It was dedicated by the town in June 1992 to recognize the Chatham fishing industry. After an international competition that drew about 100 entrants, this design by Sig Purwin - an artist and sculptor from Woods Hole - was chosen. The sculpture reflects the town’s pride in the people of Chatham’s fishing industry - proud, independent, and providers to the world of the best seafood available from the Atlantic Ocean! The motto on the sculpture is “ever changing to remain the same”, a reflection reflects how the fishing industry has changed dramatically over the years.

The history of fishing in Chatham is a fascinating story that weaves together the complex history of the fishing industry in the North Atlantic in general, with the uniqueness of Chatham’s location and coastline, which has been both advantage and liability. As a fishing community, Chatham has been unique. It is close to the major fishing grounds of the North Atlantic, putting Chatham fishermen close to the source of their catch. But until after the War of 1812, its location meant more risk of attack from pirates and privateers. Chatham’s size and location out on the elbow of Cape Cod also meant that infrastructure of benefit to the industry came more slowly than to larger fishing communities closer to Boston - improvements like the railroad and packing plants. Chatham has had unique harbors that sheltered fishing fleets from the sea, but breaks and silting have caused dramatic changes in the viability of these harbors, and later in the need for dredging. Chatham’s fishermen have had to be resourceful and adapt. In recent history and today, the biggest challenge is the regulation of the fishing industry as a means of trying to cope with historical overfishing and vastly diminished stock.

Chatham was a fishing village before it was Chatham. The Monomoyick people fished the coastline and bays, and chased whales that cruised just off the shore of the Outer Cape. In the first few generations of European settlers, shore-based whaling operations were established. The early settlers were primarily farmers, not from places in Europe with a fishing heritage. However, Chatham’s soil became increasingly depleted, and they had to turn to fishing. All through the 1700’s, Chatham grew as a fishing community. When the American Revolution began, Chatham had 27 vessels geared for cod fishing, employing 240 men. That war, and the War of 1812, hurt the fishermen, but they bounced back.

Chatham fishing reached its peak in the mid-1800’s; people came to fish, or to work in many supporting occupations, from shipbuilding to making salt. The population of Chatham doubled from 1800 to 1860, going from 1351 people to 2710. The second half of the 1800’s saw serious decline, for many reasons, but fishing remained integral. Throughout that century, the fishing community adapted to shifting harbors, evolving methods, and changing supply, giving rise to a presence throughout the town - shanties on every sheltered beach, piers and outfitters from South Chatham to Stage Harbor to the current harbor area in Aunt Lydia’s Cove.

The early twentieth century was a period of survival in a diminished village struggling to compete with much larger fishing communities. Resourcefulness and hard work allowed the fishing community to survive. The town gave the industry a boost in 1946 by building the Chatham Fish Pier, which greatly improved the productivity of bringing the catch to shore and off to market. The story through the second half of the twentieth century has been one of continuing struggle and proud survival. Regulation, somewhat like Chatham’s location over the years, has been and continues to be both a benefit and a challenge. The Cape Cod Commercial Hook Fishermen’s Association, based in Chatham, is a nationally recognized, non-profit organization that aligns protection of the oceans with the interests of our historic fishing community.

In an essay written in 1992 to commemorate the dedication of the Chatham Fishermen’s Monument, Donald Franke wrote"

“The Monument to Chatham fishermen erected at the fish pier stands to help make everyone aware that Chatham’s heritage as a fishing community is not simply a matter of history. The Monument is dedicated not simply to those who have worked in the past to preserve Chatham as a fishing community in days when nature and war threatened its existence; it is dedicated as well to those who are working today to see that fishing remains a vital path of both Chatham’s present and future. It is a testament to the fact that below all the ocean views, so many lives in Chatham are still tied to the sea, and will remain tied to the sea as long as people want fish on their table.”