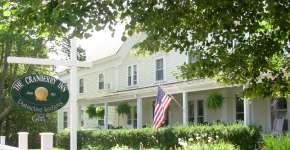 The Cranberry Inn has the distinction of being one of Chatham’s oldest lodging establishments. It was built in the 1830’s by Gideon and Reliance Small as a private residence. By 1884 their descendant, Capt. Sylvester K. Small, turned it into an inn called the Traveler’s Home. He is known to have recruited workers from Nova Scotia to work at the Inn. Small left Chatham in 1894 and the Inn was purchased by a group of business owners in Chatham, who in turn sold it in 1898 to John P. Farmer who changed the name to the Monomoyick Inn.

In 1935, Farmer’s widow sold it to Carl and Doris Chandler, who started the first restaurant on the property. The Chandlers sold in 1953 to George Noyes who gave the Inn its present name, the Cranberry Inn, reportedly named for the abandoned cranberry bog that is visible behind the property.

By 1963 it was owned by Mary and Richard Hamilton who had a long history with the inn. Mary worked at the Inn in the 1920s and Richard’s mother worked for Capt. Small in 1886. Bill and Kay DeFord purchased the Cranberry Inn in 1999.