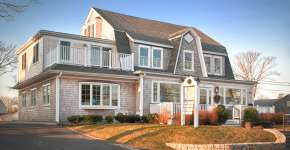 When Captain Isaiah Lewis built this house for his young bride Polly in 1818, it was a single story, full cape at street level. Upon retiring from the New York Shipping Line in 1840, Capt. Lewis opened a grain business in a small store located in front of his home. That small store building was subsequently moved up Main Street, near the Congregational Church, where it is now Canterbury Leather. His grain business was unsuccessful, and Captain Lewis took a job outfitting whaling boats in Whitewash Village on Monomoy. The house passed to Polly in 1863, and then to their daughter Addie in 1876. Addie ran a small private school in the living room until the house sold at auction in 1887.

Local wheelwright and carriage manufacturer Edmund E. Eldridge bought “Prospect House” for $3,000 and ran it as a boarding house. Eldridge added a second story by lifting the house and constructing a new first floor, with the existing structure becoming the new second floor. In 1913 Heman Harding bought the house for his private residence. A prominent Chatham attorney, Harding served as a State Representative and Senator. He completely renovated the house, which also had the distinction of being the first in Chatham to have electricity, in 1915.

The property was sold in 1960 and subsequently housed a series of restaurants – it was once the Chatham Arm’s Restaurant, The T-Bears Chef’s Table, and most people now remember it as Christian’s Restaurant. Currently it is a home decor shop.