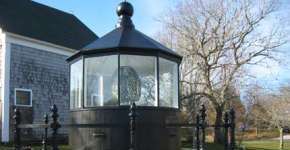 Chatham's Twin Light: From 1808 until 1923, ships in the Atlantic knew they were off Chatham MA when they saw the town's famous twin lights. In the course of their history, the two lighthouses were moved back from the sea at least twice because of erosion. In 1857, the lights were equipped with Fresnel lenses so they would project the beam farther out to sea. In 1923, a clock mechanism was installed so they could rotate, making it unnecessary to have two lights. Consequently, one was moved to Eastham to become Nauset Light; the other remained in Chatham until 1969 when it was replaced by a new and larger lantern room with modern aerobeacons. The old lantern room and its Fresnel lens were donated to the Chatham Historical Society. The relocation to the grounds of the Atwood House Museum was made possible by the daughters of Mrs. Fannie Lewis Shattuck, a supporter of the society from its beginning.

With the expansion of the Atwood House Museum in 2005, increased parking was necessary and the lantern house was moved to its present location. It was determined that both the lens and the lantern room required major restoration. These improvements were made possible by generous grants from the Community Preservation Trust Fund and the Cape Cod Five Cents Savings Bank Charitable Foundation. Thanks to the detailed specifications of architect Edward C. Collins, the lantern room now has been restored so it appears exactly as it did when it shone from the tower on Chatham's east shore.

To the best of our knowledge, it is the only lantern room with its original Fresnel lens that still operates. The light is on whenever the Museum is open, so climb the stairs and look inside to see the mechanism that rotates the light.