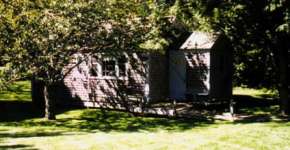 The latest addition to the museum complex is this simple camp that was used by the Joshua Nickerson family as a summer cottage. It was located on the area in Chatham known as North Beach, a long point extending from Orleans to Chatham that was for many years a favorite place to get away from one's daily life and live more simply. When erosion threatened the camp, it was floated across the water in the spring of 1991, and given to the Museum by the son of Joshua Nickerson. This camp is typical of many that were built on the beach by squatters in the early part of the twentieth century on land that now belongs to the National Seashore. Many have been washed into the sea by storms over the years, and as of 1999 all of them must be abandoned by an agreement made with the National Seashore when it was first created. The camp provides a picture of the simplicity that people once sought for their vacations.