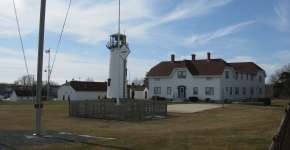 “Station Chatham”, as the Chatham US Coast Guard station is called, is one of twenty designated Surf stations in the Coast Guard. The primary mission here is Search and Rescue. The designation of Surf Station harkens back to the days of the Surfmen of the US Life-saving Service, from which the present-day Coast Guard is descended.

The Search & Rescue mission at Station Chatham today is responsible for the safety of the local fishing fleet and recreational boating community. Station Chatham is home to the only three 42-foot Special Purpose Near Shore Lifeboats in service in the Coast Guard. Due to the shallow shifting sand bars found on the Chatham Bar, and the harsh weather conditions during the colder months, Station Chatham requires surf capable vessels with shallow draft capability. Its Search and Rescue Area of Responsibility includes the waters from just north of Cahoon’s Hollow Beach (on Wellfleet’s Atlantic coast) south to halfway between Monomoy Island and Nantucket, and westward across Nantucket Sound to a point roughly below Centerville.

While a monument and a plaque have been erected in honor of some of Chatham’s most famous Search & Rescue stories, the mission continues today, no less dedicated. In July of 2010, Station Chatham responded to a distress call from 44-foot yacht Bronze Monkey. A crew was immediately launched on a 27-foot response boat; the Coast Guard crew transferred 11 passengers off the Bronze Monkey, moments before that entire vessel became engulfed in flames.