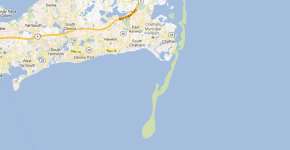 The changes in the coastline profile that have been described on other eTourChatham pages – the erosion of the bluff under the old Chatham Light, and the “1987 Break” in front of you – are only a few instances of a cycle of erosion and shoaling that covers Chatham’s barrier beach, Morris Island, and Monomoy. Friends of Chatham Waterways, a local Chatham non-profit organization, has created a new book that vividly demonstrates the coastline history with old drawings, pictures and charts.

Ever since Samuel de Champlain anchored in Stage Harbor in 1606, to fix his rudder broken on Pollock Rip, we have watched nature changing our shorelines by erosion and shoaling, as well as changing access to our waterways by opening new inlets and closing old inlets – inlets that connect the ocean with our harbors and bays and estuaries.

The protective barrier beach to the East has provided safe harbor for fishing fleets, packet ships in the 1800s, and recreational boaters in sail and power boats. That barrier has been breached multiple times in almost identical places over a repeating 160-year cycle (1685, 1846, and 2007 in the case of a break roughly opposite Minister’s Point, for example). When the barrier is breached, access to the ocean changes, and fleets have to move from one harbor area to another to continue their operations.

Long, narrow Monomoy was once almost connected to mainland Chatham, during the 1940’s and 1950’s. Just a short barge ride across a channel would get people and their “woodie” beach wagons on the island to get all the way to the end of Monomoy Point, a distance of 9 miles. In 1978, Monomoy Island, then disconnected from the mainland, was breached to form two islands. Now, in 2012, only 34 years later, the shoaling by sand from the West and sand coming from the North is close to restoring one long Monomoy. Sometimes nature has shoaled areas where navigation has been important to commercial and recreational boaters. When the Town felt it necessary to keep certain channels open, costly dredging has been required. The dredged materials are transported to protect shorelines and Town Landings that have suffered from erosion.

In Chatham Harbor, for example, just in the last ten years there has been a great deal of shoaling from the two inlets in our barrier beach to the East. Channels have been narrowed at high tides, and at low tides a lot of shoals are laid bare. That has restricted the size of the mooring field for our fishing fleet, but it has enlarged the area for seals to haul out, and for our soft-shell clam fisher-folk to do their shell fishing.

At the Eldredge Public Library and the Town Offices, you can pick up a free book, Chatham Waters and Shorelines, Then and Now, 1712 – 2012, produced by Friends of Chatham Waterways, to see many more charts and photos about Chatham's shorelines.

The eTour map on the accompanying page shows the coastline profile at a few selected points in time. These drawings are approximations only, based on more extensive images available in the Friends of Chatham Waterways book, and from research materials on coastline erosion.

Touch the Coastline Profiles link below, then select different views using buttons on that page. The profile map shows the Chatham coastline