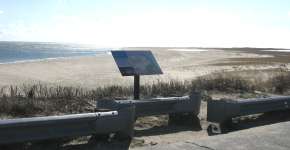 The Chatham 300 plaque displayed at the Lighthouse Beach overlook tells the story of the Mayflower’s encounter with Chatham’s treacherous waters. The approximate location of the Mayflower’s turnaround is marked on the eTour map with pin number 5a.

Nathaniel Philbrick, author of the book Mayflower: A Story of Courage, Community and War, gave the keynote address at Chatham 300's Founders Day ceremonies on June 11, 2012; the following excerpt re-tells the story of the Mayflower's turnaround off Chatham:

The people we refer to today as the Pilgrims were more than 200 miles off course. Their intended destination was near the mouth of the Hudson River. So Master Jones turned the ship south, and he started sailing along the edge of Cape Cod toward the Hudson River. Unfortunately, there were no reliable English charts of the waters between the Cape and the Hudson River, and for all intents and purposes, Master Jones was sailing blind.

As one of his crewmen checked the depth of the water with what was known as the deep-sea or "dipsea" lead, Master Jones kept the Mayflower within a couple of miles of the beach, where the depth hovers at about a hundred and twenty feet. For the next five hours they slipped easily along, and after sixty days of headwinds and storms, it must have been a wonderful change for the passengers, who crowded the chilly sun-drenched deck to drink in their first view of the new world. For Master Jones, it was the beginning of the most tension-filled portion of the passage...

He sailed south on an easy reach past the future locations of Wellfleet, Eastham, Orleans, and of course, Chatham. Throughout the morning the tide was with them, but around 1 pm it began to flow the other way. Then the depth of the water dropped alarmingly, as did the wind. Suddenly, without warning, the Mayflower had stumbled in the frightening maze of shoals called Pollack Rip...

The placid heave of the sea had been transformed into a churning maelstrom as the outgoing tide cascaded over the shoals ahead. With the wind dying to nothing, Jones had no way to extricate his ship. They "fell among dangerous shoals and roaring breakers," Bradford wrote, and they were so far entangled therewith that they conceived themselves in great danger.

It was 3 pm with only another hour and a half of daylight left. Just when it seemed like they might never live to see dry land again, the wind began to freshen from the south. This combined with a fair tide was all the Master Jones needed. By sunset at 4:35 pm the Mayflower was well to the northwest of Pollack Rip. With the wind building from the south, Jones made a momentous decision - they weren't going to the Hudson River. They were going back around Cape Cod to what we call today Provincetown Harbor.

To that one fateful decision, whereby what came to be called Plymouth Plantation moved from New York to New England, depends so much of this region's and this country's history. And it all happened off the turbulent waters off Chatham.