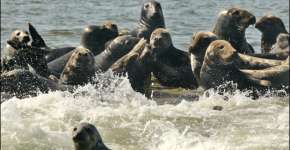 [Note: This page was contributed by Greg Skomal, a senior fisheries biologist with the Mass. Division of Marine Fisheries, who is the face of white shark research in Chatham.]

[Audio only: This is Greg Skomal of the Mass Division of Marine Fisheries. I have been studying sharks for almost 30 years and the white sharks off Chatham since 2009. ]

Chatham, like all of New England, has vibrant ocean wildlife like whales and seals and many varieties of fish, including the great white shark. Seals are the most visible marine animals in the area and can be seen in Chatham Harbor and hauled up on many of Chatham's beaches. Great white sharks, which are generally very elusive and difficult to find in the North Atlantic , can now be predictably found off the eastern shore of Cape Cod and, in particular, off the coast of Chatham and Monomoy Island. These sharks are drawn here by their prey, the robust gray seal population present around Chatham.

Seal populations all along the eastern coastline were historically hunted by Native Americans and early settlers and were severely depleted by the end of the 17th century. In the late 1800s, Maine and Massachusetts enacted seal bounty programs, which kept seal numbers low; the Massachusetts bounty program ended in 1962. In 1972, seals became protected under the U.S. Marine Mammal Protection Act, and populations started to grow. Studies show steady, although not exponential, population growth since 1980.

Therefore, in the 1930's, before Monomoy was a wildlife refuge and people had summer camps and drove all over the peninsula, seals were considered rare and you would be hard-pressed to find one. Today, after 40 years of protection, the seal population in Chatham waters has rebounded and thousands can be seen - in the harbor area and all over Monomoy.

Although up to four species of seals live in the region, primarily two are most commonly seen in Chatham waters - the harbor seal and the gray seal. The smaller harbors seal at up to 250 pounds, is a seasonal visitor that migrates in and out of the area. Gray seals, which can weigh up to 900 pounds, are now year-round residents with breeding colonies around the Cape and Islands.

Hauling out is the seal's behavior that makes them so easily visible to us. It means temporarily leaving the water between periods of foraging for food, to simply rest and avoid predators, and for social activity. Seals cannot move well on land, but in some areas, like Monomoy, they haul themselves up the beach. On sandbars, seals position themselves over submerged shoreline, and when the tide goes out they are left resting on the sand, basking in the sun. They will typically stay put until the tide comes in again, unless disturbed. The best time to see the seals resting on a haul-out is within two hours either side of low tide on a sunny afternoon. Monomoy is one of the largest haul-out sites for gray seals on the Eastern Seaboard. As the shore is built up or erodes, haul out locations are therefore affected, so seal haul outs in Chatham Harbor are especially prone to changes.

Pin #3a on the eTour map shows where seals have often hauled out in prior years along the south end of Nauset Beach. A few seals are often visible immediately around the Chatham Fish Pier, especially when fishing boats are unloading. Seal watching is a popular recreational activity, with several local enterprises offering seal tours during the summer. In your own boats or kayaks, or if you're hiking near a haul-out, be mindful that these are wild animals, and you are required to stay at least 50 yards away.

Besides attracting predators - that is, sharks - the presence of the harbor and gray seals has had other implications. Chatham fishermen are impacted by these animals because they disrupt fishing activities and prey upon numerous important fish and shellfish species. In addition, the seals generate large amounts of waste, which is not only odiferous, but likely impacts local water quality. Unfortunately, the extent to which the seals of Chatham impact local fisheries and local marine waters remains poorly understood; clearly, additional studies are warranted.

Chatham is unique among North American coastal communities in having a predictable seasonal presence of white sharks off the coast. As such, these white sharks, which belong to the larger North Atlantic population, provide the rare opportunity to study the life history and ecology of this species. Except for a handful of anecdotal stories, very little is known about the world's most charismatic shark in this part of the world. The species is truly rare, so the recent emergence of white sharks in Chatham offers the incredible opportunity to study the biology of this species for the first time in the Atlantic. Although the number of white sharks in Chatham has been increasing in recent years, we really can't tell if this is indicative of population growth or simply a shift in the current population in response to the growing food source, seals. Additional research on these sharks may ultimately answer this question.

Since 2009, scientists with the Massachusetts Division of Marine Fisheries have been studying the white sharks off Chatham using state of the art tagging technology. A total of 18 white sharks have been tagged with either acoustic transmitters or satellite-based pop-up tags. The acoustic transmitters emit a high frequency ping that is picked up by receivers in the Chatham area. This technology allows us to examine the movements and residency of white sharks while they are in the area. It also gives us a sense of when sharks may be in close proximity of swimming and surfing beaches as well as large seal haul-outs. So far, our results from 8 sharks tagged with these transmitters show that some white sharks are only in Chatham for a few days while others stay up to 4 months.

The satellite tags are used to tell us where white sharks go when they leave Chatham waters. These tags collect data like water temperature and depth. The tags are programmed to detach from the white sharks months later and transmit those data to satellites, which relay them back to us. We can then recreate the three dimensional movements of the shark since we tagged it. Our results from 10 white sharks tagged with this technology indicate that most of the sharks overwinter off the northern coast of Florida before returning north in the summer. However, one of the tagged sharks moved to the Gulf of Mexico while another spent the winter hundreds of miles off the coast of Georgia where it was diving to depths as great as 2,500 feet every day. Why it was exhibiting this behavior remains a mystery. Hopefully, additional satellite tagging will provides an answer.

Chatham has embraced the privilege of being the seasonal home to white sharks. In fact, the new Monomoy school district comprised of Chatham and Harwich has chosen “Sharks” as their team name. But Chatham also recognizes the responsibility we all now share to ensure that we protect white sharks by behaving responsibly. Hunting and killing of white sharks has been illegal (in the US) since 1999 and we discourage fishing activities that will disrupt the natural behavior of these animals and their prey. The Town of Chatham is well aware of the issues posed by the presence of sharks off the coast, and the possibility that one might be sighted someday in the harbor area or close to the swimming beaches. Although the risk of shark attack is considered small, swimmers should take notice of Chatham beach closures as well as avoid swimming in areas with dense seal concentrations.

Pin 3b on the eTour map shows an area we refer to as Shark Cove, where we've tagged most of the Great White Sharks.