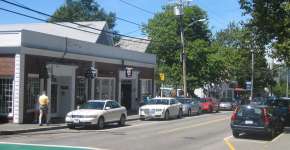 The next segment of Main Street goes from Cross Street to Chatham Bars Avenue.

Be sure to stop in the Visitor Information Booth just past Town Hall, or at the Chatham 300 Information Center located right across the street in the Mayo House during the summer of 2012, for more information about what to see and do in Chatham, especially all the other tours that one can do in the town. These other tours are also listed under the “All Tours” button of our home page.

As you continue down Main St., there continue to be many interesting buildings besides those with individual eTour pages. Just past the Information Booth on the right side of the street is the Yankee Ingenuity building. This building was originally Walter Hinckley's Stable and Blacksmith Shop, from 1849. It was purchased in 1908 by Elmer Emery who owned a bowling alley and pool room next door, and may have used it as a shoe and boot shop. Charlie Lake turned it into a barber shop in 1911 and Frank Lockett opened a shoe repair shop in 1917. Nelson Forgeron, an apprentice to Lockett, bought the building in 1921, and he and his family operated a shoe sales and repair business here for 50 years. Jon and Lynn Vaughn opened Yankee Ingenuity in the building in 1971, and made major renovations in 1987.

Across the street, Retired Captain Franklin Nickerson built this building that is now Chatham Cookware around 1850, or at least part of it. It is believed there were originally three buildings, one of which was the Franklin Market. Around the time of Captain Nickerson’s death in 1877, the village center was shifting from the streets near the harbor and the lighthouse to Main Street. Mary Augusta Young moved her “dry and fancy goods” store from Water Street to the Nickerson Market around 1879. Mary Augusta Young was the model for Joseph C. Lincoln's Mary Gusta. In 1889 the Nickerson store was sold at auction to Captain Leander Gould. The building continued to change ownership and many commercial businesses came and went. Around 1913 it was the Piccadilly Lunch and Tea Room, and by 1943 it was an art studio.

For more than 150 years, these two buildings have survived as commercial establishments.

Continue along Main Street toward Chatham Bars Avenue; cross at some point to the left side of the street, where the last eTour site on this segment of Main Street is Kate Gould Park. Be sure to notice, however, the area behind the Visitor Information Booth, now a public parking area; the original Chatham Bandstand originally stood there, at street level, before it was moved to Kate Gould Park.