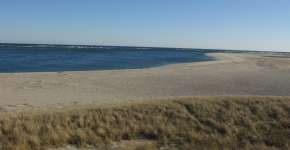 Lighthouse Beach, as you see it today, is relatively new, but it has become one of the most popular beaches in Chatham during the summer, if not all year round. Every day people walk the beach, or just sit in the parking lot above watching the surf at the Chatham Break, or come to see how the sands have shifted from a month earlier. Before the break of 1987, the beach here was one of many coastline areas of Chatham where people could swim, but it was not one of Chatham’s official beaches; it was not as expansive, there was no parking, and there were no lifeguards in the summer. The break of ’87 changed some of that. The break, and the resulting new currents and new channel have shifted significant amounts of sand over the past twenty-five years, so now Lighthouse Beach connects to what used to be the north end of the outer barrier South Beach.

Because of the connection to South Beach, and a similar connection of South Beach to Monomoy, caused by the same shifting sands, it is now possible to walk for significant distances, in fact all the way to the old Monomoy Light at the south end of Monomoy. Prior to the current configuration of the sands, Monomoy has not been accessible by foot since the beginning of the 20th century. If you’re inclined to venture that far, you are encouraged to visit the Monomoy Wildlife Refuge visitors center beforehand, and learn where South Beach turns into Monomoy, and the rules about when you may be on Wildlife Refuge property.

Lighthouse Beach is now patrolled, but not life-guarded, during the summer season. A pamphlet available at the local Visitors Center provides information about using Lighthouse Beach -

Lighthouse Beach is a pristine walking beach and does not have lifeguards. It is swim at your own risk and open in most areas. The beach is monitored by beach/boat patrols who are there to assess the beach, educate the public, and to prevent and respond to emergencies. The patrols are not there to guard you or your families in the water. ... Note that there is not public parking at Lighthouse Beach.

There are clearly marked “no swimming“ areas at the south end of the beach, and the entire beach may be closed as weather and water conditions dictate. There are also no public restrooms nearby.

With nature’s help, and despite all the cautions, Lighthouse Beach is now one of the largest beaches in Chatham, the most picturesque, and one of the most popular.