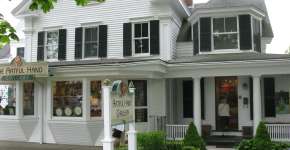 Ziba Nickerson, who was engaged in the lumber and shingle trade for many years, built this building for his general store in 1853. About 1855 the first telegraph was installed by the Boston and Cape Cod Marine Telegraphy Company, which was later bought out by Western Union.

The telegraph’s main function was to communicate with passing ships. With the help of a telescope and a tower that was attached to the house, Ziba, and later his son William, could observe passing ships which would use signal flags to transmit simple messages like the name of the ship. The Nickersons would then telegraph the ships position to Boston or New York so they could estimate the ships arrival time.

More importantly, the telegraph was also used to warn the ships of coming storms. Ziba Nickerson would receive the weather information over the telegraph, then dispatch a signalman by horseback to Monomoy Point to transmit weather conditions to passing ships via the flag system. Ziba ran the post office out of his store from 1861 to 1881, and then William was postmaster from 1897 to 1910. William is credited with being a Weather Bureau Agent and created the Chatham Marine Observatory in 1883. He was also responsible for bringing the telephone to Chatham, which he operated out of the store for many years.

The observation tower blew down many years ago in a storm. This building later served as the Hollyhock Tea Room and Inn, ran by Marjorie Haven, and is currently the home of the Artful Hand Gallery.