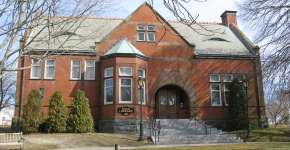 The Eldredge Public Library was a gift to the people of Chatham from one of its natives, Marcellus Eldredge, a successful businessman and legislator in Portsmouth, NH, who retained close ties with his home town. In 1894 he purchased land on Main Street for $1000. Construction of the new library took a year and cost about $30,000. The Library was dedicated in formal ceremonies on July 4, 1896 and opened to the public a week later. The EPL replaced the “Chatham Public Library and Reading Room”, an informal library association begun in 1887. The Library was added to the National Register of Historic Places in 1992.

Marcellus Eldredge was the son of Heman and Polly (Harding) Eldredge. Both the Hardings and the Eldredges had deep roots in Chatham, going back almost to the earliest European settlers. Marcellus married a local Chatham girl, Mary Dill, and the couple divided their time between Portsmouth and their mansion on Watch Hill in Chatham Village. In addition to the Library, Marcellus was involved in other significant Chatham projects. He was one of three primary investors in the Hotel Chatham (which was located on the present day Eastward Point), majority stockholder and first president of the Chatham Railroad Company, and a benefactor of Chatham’s First United Methodist Church. At Marcellus’ death, his brother Heman Fisher Eldredge, an original corporator of the Library, succeeded him as Board President and Treasurer. Heman was also an original benefactor to the library and donated many books throughout his lifetime.

Architect Albion M. Marble, a student of H. H. Richardson, designed the original 67’ by 34’ building in the Renaissance/Romanesque Revival style, with a Quincy granite foundation, red West Barnstable brick walls with pink mortar, Longmeadow brownstone trim, a slate roof with terra cotta cresting, and eyebrow dormers. The interior was finished with quartered oak wainscoting, a carved oak fireplace mantle, Italian marble mosaic in the vestibule, and two Belgian stained glass windows with medallion facsimiles of the marks of two early Italian book crafters. In 1991-1992 an extensive three-story addition was added to the Library, replacing a small addition built in 1968. It was designed by A. Anthony Tappe and Associates, and is a modified replication of the original building, both inside and out. The Library’s usable space was increased to 18,000 square feet to meet the needs of modern-day library users.

The Library also houses the Edgar Francis Waterman Genealogical Collection, containing more than 7,000 reference sources for people tracing family histories, including books, CDs, periodicals, microfilm and online databases. The scope of the collection includes areas from Nova Scotia to Georgia, and as far west as Ohio.

The Eldredge Public Library is privately managed by a Board of Trustees and a Director, and the land and building are owned by the Town of Chatham. The Friends of the Eldredge Public Library support special projects and equipment needs to help make the Library one of the most broadly supported institutions in the community. The Library and the Friends of the Library offer many programs throughout the year for both adults and children.