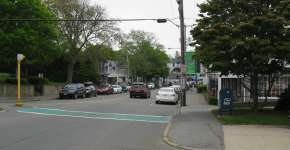 As you walk along Main Street from the traffic circle to Cross Street, also notice the many buildings that do not have individual eTour pages, but are nevertheless historically and socially significant.

For example, the building at 640 Main St that is now Canterbury Leather was built in 1840, and was the original grain store built by Capt Isaiah Lewis at his home at 443 Main Street; this location is on the East Main St. segment of the Historic Loop eTour. When Captain Lewis died in 1863, the building was moved to land near the Mayo House, where it was used as a hardware and tin shop by Sullivan Rogers and his son. Around 1870 it was moved to its present location for use as a store. Washington Taylor and Eugene Bearse later ran a grocery store, and it eventually became Chatham’s first A & P, with Edward Mallows as the manager. In the 1920s the A&P moved across the street to the current Ben Franklin location. This building also illustrates a common theme you may hear about other buildings in Chatham – the whole building being moved up the street.

Farther down the street, also on the left at 606 Main St., the Port Royal house was built in 1863 by Capt. Seth N. Eldridge as a replica of a house he saw and admired in Port Royal, Jamaica. In 1872 it was purchased by John and Emma Nickerson, and has remained in the ownership of the Nickerson family ever since. It has remained virtually unchanged in its lifetime. The cannon on the front lawn is from the U.S.S. Constitution.

Just past the Port Royal House in the small road triangle is the Civil War Vets memorial.

Continue down Main St. to Cross St. The Next buttons will take you though the sites on this section of Main Street with individual eTour pages, and then you will get to an overview page about the next segment of Main Street.